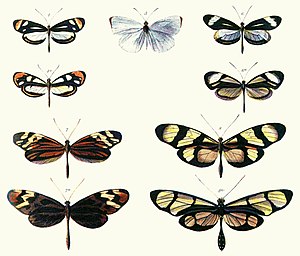 In evolutionary biology, mimicry is a similarity of one organism, usually an animal, to another that has evolved because the resemblance is selectively favoured by the behaviour of a shared signal receiver that can respond to both.[1] Mimicry may evolve between different species, or between individuals of the same species. Often, mimicry evolves to protect a species from predators, making it an antipredator adaptation.[2] The resemblances that evolve in mimicry can be in appearance, behaviour, sound or scent. Mimicry may be to the advantage of both organisms that share a resemblance, in which case it is a mutualism, or mimicry can be to the detriment of one, making it parasitic or competitive. Mimicry occurs when a group of organisms,[a] the mimics, evolve to share perceived characteristics with another group, the models. The evolutionary convergence between groups is driven by the selective action of a signal-receiver or dupe.[3] Birds, for example, use sight to identify palatable insects, whilst avoiding the noxious ones. Over time, palatable insects may evolve to resemble noxious ones, making them mimics and the noxious ones models. In the case of mutualism, sometimes both groups are referred to as “co-mimics”. It is often thought that models must be more abundant than mimics, but this is not always so.[4] Mimicry may involve numerous species; many harmless species such as hoverflies are Batesian mimics of strongly defended species such as wasps, while many such well-defended species form Mullerian mimicry rings, all resembling each other. Mimicry between prey species and their predators often involves three or more species.[5]

In its broadest definition, mimicry can include non-living models. The specific terms masquerade and mimesis are sometimes used when the models are inanimate.[6][7][8] For example, animals such as flower mantises, planthoppers, comma and geometer moth caterpillars resemble twigs, bark, leaves, bird droppings or flowers.[7][4][9][10] Many animals bear eyespots, which are hypothesized to resemble the eyes of larger animals. They may not resemble any specific organism’s eyes, and whether or not animals respond to them as eyes is also unclear.[11]Nonetheless, eyespots are the subject of a rich contemporary literature.[12][13][14] The model is usually another species, except in automimicry, where members of the species mimic other members, or other parts of their own bodies, and in inter-sexual mimicry, where members of one sex mimic members of the other.[4] 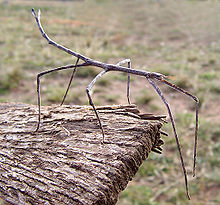 Mimesis in Ctenomorphodes chronus, camouflaged as a eucalyptus twig

Though visual mimicry through animal coloration is most obvious to humans, other senses such as olfaction (smell) or hearingmay be involved, and more than one type of signal may be employed.[7][5] Mimicry may involve morphology, behaviour, and other properties. In any case, the mimetic signal always functions because it resembles that of another organism. In evolutionary terms, this phenomenon is a form of co-evolution. It can involve an evolutionary arms race if mimicry negatively affects the model, and the model can evolve a different appearance from the mimic.[4]p161 Mimicry should not be confused with other forms of convergent evolution, which occurs when species come to resemble each other by adapting to similar lifestyles that have nothing to do with a common signal receiver. Mimics may have different models for different life cycle stages, or they may be polymorphic, with different individuals imitating different models. Models themselves may have more than one mimic, though frequency dependent selection favours mimicry where models outnumber mimics. Models tend to be relatively closely related organisms,[15]but mimicry of vastly different species is also known. Most known mimics are insects,[7] though many other animal mimics are known. Plants and fungi may also be mimics, though less research has been carried out in this area.

Did you find apk for android? You can find new Free Android Games and apps.
brâncusi síndrome cultural