I sleep in a knot. My right leg propped up against the left, crossed in mid-air, as if a chair I’d been sitting in had been tipped over. Or my left arm crooked, pushed and pressed behind me as if I was being handcuffed, the side of my face shoved into a pillow, my body twisted diagonally on the bed, looking for more ground. As a child, I remember my parents walking in while I was half-asleep, pushing my legs down, pulling my arms out straight, untying me as they tucked me in. It’s been less of a thing over the years, but I think this has always been the case – I prefer the feeling of unrest.

A knot made of a single piece of rope is resistant to attachment, of being tied to something else. It can be seen as an absurd thing.

It begins when you fail at getting two ends to meet cleanly again and again, until you’re left exhausted, unsatisfied.

It is when you take the linear qualities of thought and complicate it into mass. It’s thinking too hard, it’s working too hard. Our muscles stick together to form knots that need to be kneaded out like dough.

Follow the detours of a knot and you’ll find yourself on the long path of inward excavation, toward internal turbulence. You’re reminded of problems that can’t be solved, of messes you’ve made.

I read recently that when snakes are exposed to micro-gravity, they’ll lose their ability to tell where their bodies begin and end. As they float, weightless, they form their bodies into knots, trying to grab a hold of something, without knowing that that something is themselves. 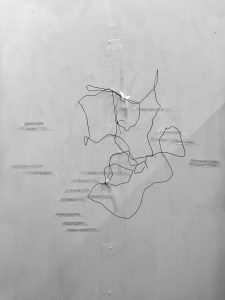 She was born in New York in an apartment overlooking a movie theatre. She grew up in the American South, running around and making forts in the Georgia woods. She’s currently in London, earning an MA in Sculpture at The Royal College of Art and getting to know the strangeness of gravity.