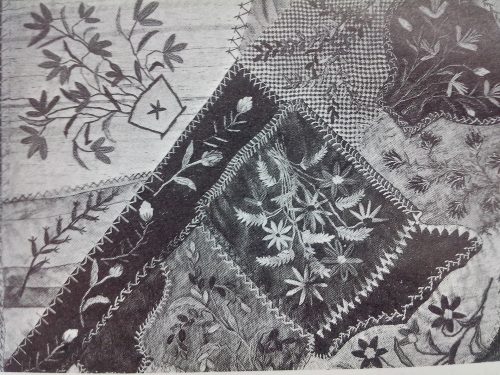 «Craftsmanship» was part of a series entitled «Words Fail Me» by Virginia Woolf. Broadcasted by BBC radio on April 29th, 1937, is the only known surviving recording of her voice.

Words, English words, are full of echoes, of memories, of associations. They have been out and about, on people’s lips, in their houses, in the streets, in the fields, for so many centuries. And that is one of the chief difficulties in writing them today – that they are stored with other meanings, with other memories, and they have contracted so many famous marriages in the past. The splendid word “incarnadine,” for example – who can use that without remembering “multitudinous seas”? In the old days, of course, when English was a new language, writers could invent new words and use them. Nowadays it is easy enough to invent new words – they spring to the lips whenever we see a new sight or feel a new sensation – but we cannot use them because the English language is old. You cannot use a brand new word in an old language because of the very obvious yet always mysterious fact that a word is not a single and separate entity, but part of other words. Indeed it is not a word until it is part of a sentence. Words belong to each other, although, of course, only a great poet knows that the word “incarnadine” belongs to “multitudinous seas.” To combine new words with old words is fatal to the constitution of the sentence. In order to use new words properly you would have to invent a whole new language; and that, though no doubt we shall come to it, is not at the moment our business. Our business is to see what we can do with the old English language as it is. How can we combine the old words in new orders so that they survive, so that they create beauty, so that they tell the truth? That is the question.

And the person who could answer that question would deserve whatever crown of glory the world has to offer. Think what it would mean if you could teach, or if you could learn the art of writing. Why, every book, every newspaper you’d pick up, would tell the truth, or create beauty. But there is, it would appear, some obstacle in the way, some hindrance to the teaching of words. For though at this moment at least a hundred professors are lecturing on the literature of the past, at least a thousand critics are reviewing the literature of the present, and hundreds upon hundreds of young men and women are passing examinations in English literature with the utmost credit, still – do we write better, do we read better than we read and wrote four hundred years ago when we were un-lectured, un-criticized, untaught? Is our modern Georgian literature a patch on the Elizabethan? Well, where then are we to lay the blame? Not on our professors; not on our reviewers; not on our writers; but on words. It is words that are to blame. They are the wildest, freest, most irresponsible, most un-teachable of all things. Of course, you can catch them and sort them and place them in alphabetical order in dictionaries. But words do not live in dictionaries; they live in the mind. If you want proof of this, consider how often in moments of emotion when we most need words we find none. Yet there is the dictionary; there at our disposal are some half-a-million words all in alphabetical order. But can we use them? No, because words do not live in dictionaries, they live in the mind. Look once more at the dictionary. There beyond a doubt lie plays more splendid than Antony and Cleopatra; poems lovelier than the Ode to a Nightingale; novels beside which Pride and Prejudice or David Copperfield are the crude bunglings of amateurs. It is only a question of finding the right words and putting them in the right order. But we cannot do it because they do not live in dictionaries; they live in the mind. And how do they live in the mind? Variously and strangely, much as human beings live, ranging hither and thither, falling in love, and mating together. It is true that they are much less bound by ceremony and convention than we are. Royal words mate with commoners. English words marry French words, German words, Indian words, Negro words, if they have a fancy. Indeed, the less we enquire into the past of our dear Mother English the better it will be for that lady’s reputation. For she has gone a-roving, a-roving fair maid.

Thus to lay down any laws for such irreclaimable vagabonds is worse than useless. A few trifling rules of grammar and spelling is all the constraint we can put on them. All we can say about them, as we peer at them over the edge of that deep, dark and only fitfully illuminated cavern in which they live – the mind – all we can say about them is that they seem to like people to think before they use them, and to feel before they use them, but to think and feel not about them, but about something different. They are highly sensitive, easily made self-conscious. They do not like to have their purity or their impurity discussed. If you start a Society for Pure English, they will show their resentment by starting another for impure English – hence the unnatural violence of much modern speech; it is a protest against the puritans. They are highly democratic, too; they believe that one word is as good as another; uneducated words are as good as educated words, uncultivated words as good as cultivated words, there are no ranks or titles in their society. Nor do they like being lifted out on the point of a pen and examined separately. They hang together, in sentences, paragraphs, sometimes for whole pages at a time. They hate being useful; they hate making money; they hate being lectured about in public. In short, they hate anything that stamps them with one meaning or confines them to one attitude, for it is their nature to change.

Perhaps that is their most striking peculiarity – their need of change. It is because the truth they try to catch is many-sided, and they convey it by being many-sided, flashing first this way, then that. Thus they mean one thing to one person, another thing to another person; they are unintelligible to one generation, plain as a pikestaff to the next. And it is because of this complexity, this power to mean different things to different people, that they survive. Perhaps then one reason why we have no great poet, novelist or critic writing today is that we refuse to allow words their liberty. We pin them down to one meaning, their useful meaning, the meaning which makes us catch the train, the meaning which makes us pass the examination.